ADVERTISING CAMPAIGN “POLDINA, LIGHT WHERE YOU HAVE NEVER SEEN IT”

Zafferano presents the system of advertising initiatives with which in November and December Zafferano will promote Poldina, the iconic rechargeable battery lamp from the “Zafferano Lampes-à-porter” range.

The campaign covers the last part of the year 2020 with a twofold objective: on the one hand, to strengthen the association between the portable lamp category and the Poldina model in the general public of private consumers, accrediting Zafferano as a leading brand in the lighting segment. wireless; on the other hand, arriving in the homes of Italians, giving a boost to sales around Black Friday and Christmas. To reach such a large audience, the most efficient mass media were chosen with respect to the profile of potential customers.

The Poldina TV commercial – available in three lengths: 15 “, 30”, 60 “- tells three short stories, intertwined, in which the main lamp is used, like a” modern candle “, in different situations: at the end , all the characters reach a dark and quiet place where they can admire the full moon, whose closing image overlaps that of Poldina. An off-screen voice describes Poldina as “the light where you have never seen it before”: the faithful luminous companion that gives you the freedom to illuminate, the wireless device that brings light wherever it is needed, even where the electricity grid does not reach.
Actors, direction, photography, narrator, original music have been carefully chosen to convey a poetic, dreamy, emotional atmosphere. The “sound logo” at the end of the spot – three notes, which recall the three syllables of the name Poldina – attract the listener’s attention, and are instantly associated with the product, making it recognizable and identifiable: a sound distillation of the corporate identity, that is imprinted in the memory and has the ability to reach the audience, potentially more and more on the move and distracted, even if they are not looking at the screen.
You can see the long version of the spot on YouTube: https://youtu.be/hI3KWbb69VY

The creativity of the print media is inspired by that of the commercial; a backstage photo shows Poldina in the foreground, in an unusual situation, conveying the values we associate with portable lamps: the freedom to illuminate, the sense of the unexpected, dynamism and versatility. The image illustrates the concept expressed in the copy particularly well: “Light where you have never seen it before”. 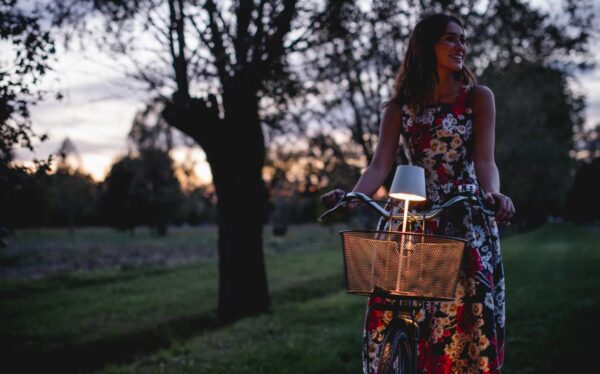